For a brief period during the 1970s, human civilisation was convinced that it would establish a human colony in outer space within the next decade. Serious plans and designs for such colonies were discussed. But the bubble quickly burst and decades later we are still on earth, tackling problems of urban expansion, unfettered construction in the guise of development, webbing an intricate socio-economic network. Featuring works by 30 Indian modern and contemporary artists, this show interrogates the physical and psychological conditions of such earthly constructions.

Those works, by artists spanning different generations, explore mental, material and physical constructions by deploying a variety of materials and approaches – formalist, abstract, modernist and conceptual. Some works have an architectural form, combining visual and spatial properties to create an aesthetic experience. Gulam Mohammed Sheikh’s Kaavad: Travelling Shrine: Home (2008) is an installation of 34 panels that covers an entire room. Kavaads are a method of traditional storytelling made using multi-panelled wooden boxes and here Sheikh depicts incidents and characters from his personal history in a figurative and narrative style of painting, influenced by the aesthetics of traditional image- making styles of India, China, Japan and Persia. Elevator from the Subcontinent (2011) by Gigi Scaria is viewed in a static elevator. Inside, the viewer is disorientated by scrolling screens on three sides that simulate the vertical motion of an elevator. After adjusting to the dizzying experience due to simulation of an elevator, one gets a tour of a building. Starting in the underground parking, it moves up to the terrace to view a dense concrete urban cityscape, passing through the living rooms of various lower middle class and upper middle class houses. The decoration and arrangement of furniture in the room gives away the social positioning of its resident. The work, first shown in India’s pavilion at the 2011 Venice Biennale, negotiates the metropolitan social divide of class and caste. Constructs (2008–15) by Nataraj Sharma is an installation of two large iron towers, rusted and half- constructed, built like the modern apartments. The repetition of patterns, structures and its scale comments on the entrapment and unfeeling environment of our living. This installation is viewed with several large scale paintings by Sharma that show various scenes from a construction site – towering buildings against the miniscule size of man, tall cranes and extensive scaffolding, to display the scale of constructions. 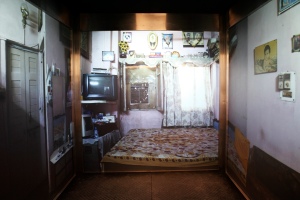 Gigi Scaria, Elevator from the Subcontinent, 2011

The urban landscape – the density, the overpowering fields of concrete – can be seen in most of the artworks. The paintings of Indian modernists F.N. Souza, S.H. Raza and Ram Kumar shows earth, streets, churches and villages. While most of the works in the exhibition focus on buildings, few focus on human relationships with buildings. Works by Sudarshan Shetty and Zarina give different articulations of home, waiting and longing. The abstraction of forms is seen in the works of Yamini Nayar, Jeram Patel, Ganesh Haloi and V. Vishwanadhan. Yamini Nayar’s photographs are close-ups of collages created by pasting, cutting, ripping, scratching, sticking paper, glass, thread and wire. Ganesh Haloi’s perception of landscape is conceptualised in geometric forms in his paintings. The abstractions are memories of an imagined space constructing sublime feelings and transcendental space.

Urban life offers us plenty of experiences of sites of construction, but the construction of memories and experiences is far more appealing as it challenges the current state while constantly reviewing our world and perception. More bent on the physical entrapments of the urban jungle, the exhibition has an exiguous engagement with the constructions of the mind as seen in the more abstract forms. One work epitomising this is Anish Kapoor’s In Mind (2014), where a transparent acrylic cube manifests emptiness by trapping air bubbles, perhaps the way an artist constructs with materials to reify mental imagery.

This review is published in Art Review Asia, Autumn 2015.